514 equivalent: Skating in the Old Port or on Beaver lake on Mount Royal.

In an effort to find something interesting to do on a Saturday night that didn’t involve sitting around and inflicting undeserving damage on my liver and my hearing, I asked Google what there was to do on a cold, wintry night in Toronto. The most intriguing answer was:

DJ skate nights at the Natrel skating rink at the harbour front every Saturday from December 17th-February 18th. http://www.harbourfrontcentre.com/djskatenights/

After casting a longing look at the nearby skating rink in Nathan Phillips Square that I could see from my living room, I grabbed my skates and walked down Bay st towards the waterfront. Despite the cold and gusty wind, there was a surprising number of Torontonians taking advantage of this activity. So much so that actual skating  was impossible. One simply progressed slowly in a circular pattern while doing one’s best not to trample the small children that scurried through or collide with novices performing balancing pirouettes and grasping at those passing by for stability.

The most noteworthy feature, in addition to gorgeous view of the skyline and the CN tower, was that there were several costumed mascots on the ice. They ranged from the expected (a wolf, a beaver), to the mildly confusing, namely a grown man in a red parrot onesie. I chose not to inquire as to the motivation for the attire but requested a selfie nonetheless. For journalistic purposes only: 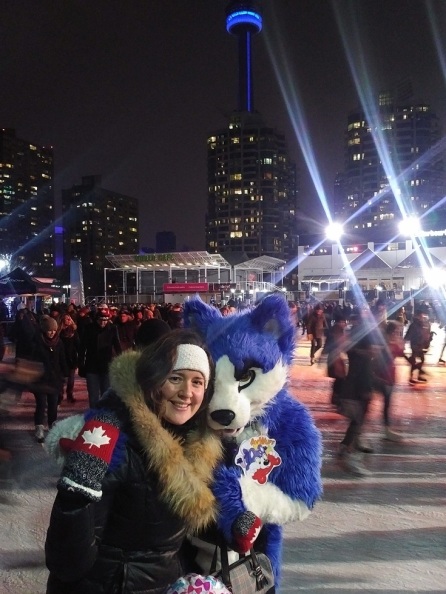 I had arrived around 9 pm (the event started at 8) and by 10, the crowd had lessened and aged considerably. The radio station animating the event had organized a game called “Gold digger” and had drawn the winning name by that point. The smell of questionably legal recreational combustible substances wafted over a portion of the rink. I decided it was time to call “veni, vidi, vici” and head home.